skip to main | skip to sidebar

The Walrus Has a New Gig 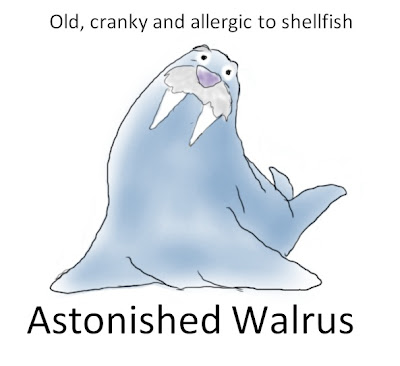 A.W. has found a new calling; he's become the roving restaurant critic for Mouse Troop! Drop in and check out his quick n' easy views on finding the best dining at Disney. See ya there!
Posted by Rich T. at 10:59 PM No comments:

Many thanks to all you kind folks who've dropped by Astonished Walrus over the past couple of years despite my neglecting the site so badly. I'm posting this to point you toward my new blog, which I hope to keep updated much, much, much more frequently. Mouse Troop is a site centered around Disneyland Resort, but will also be a branching off point for more posts about all aspects of the Walt Disney company, including more "Walrus" articles. If you'd like to take a look, please drop by and post your comments!

And thanks again, everyone!
Posted by Rich T. at 8:14 PM No comments: 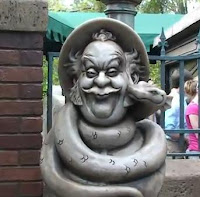 On the one hand, it's clever, imaginative, and has some terrific new busts that match the Mansion's visual style and macabre humor fairly closely.

On the other hand, it pretty much destroys any feeling of creepy foreboding one should feel when approaching the Haunted Mansion. Now they're telling you right up front that "the ghosts are going to look something like this" and "it's all in good humor, don't be scared."

This is going to be nice for small children braving the Mansion for the first time; They'll be reassured that the ghosts are actually a bunch of crazy characters who care more about looking creepy than seriously trying to scare the guests.

Here's a video from Jeff Lange. You be the judge.

Some detractors are already labeling it "McMansion Playland." I don't think it's as disastrous as that--In fact, I like quite a bit of it. I like the busts, even though the twins look far too cartoony (plus I never like dead children jokes). I love the tributes to Marc Davis, Paul Frees, Thurl Ravenscroft and many others who brought this wonderful ride to life. I like the crazy bookcase.

But, I do think it goes too far. It's too loud, too silly, and it gives too much away too soon. And I really, really hate that obnoxious Playhouse Disney-style poetry booth--even though it's technically impressive. For crying out loud, you should not be hearing the ghosts talk to you before you've even reached the front door! The whole point of the ride's pacing is to start with cold drafts, stretching paintings, and lots of creepy atmosphere, then build up to the ghosts actually making themselves visible to you. Now that whole terrific concept has been tossed out the cobwebbed window.

Haunted Mansion purists will despise it. Most families visiting the park will probably love it. I'm hoping that the folks who put this together take a good look at the thing and eventually replace some of the atmosphere-ruining setpieces with something equally imaginative--but far more subtle and eerie.

Good storytellers don't give everything away in the prelude.
Posted by Rich T. at 9:08 PM No comments:

Normally, I keep my app reviews on my other blog, but Tiny Wings--a simple, unpretentious iPhone game--is something special. It's a terrific, charming little work of art. And I do believe a video game qualifies as art when all its elements come together to create an emotional response to a created world.

Still images don't do it justice. Even the video I've linked to above doesn't completely convey its charm.

It begins with a flightless bird in a nest. As the sun rises, he leaps to the sky fluttering his tiny wings, only to drop earthward toward the rolling hills that make up his island home. When you touch the screen, he folds his wings. If he's airborne at the time, he'll dive faster. If grounded, on the downhill slope of a valley, he'll slide and pick up speed in an attempt to catapult himself off the crest of the next hill. You need to remove your finger from the screen on the upslopes to allow him to flap his wings.

The goal is simple: try to hit the downhill slopes just right, pick up speed for launch, and stay in the air for as long as possible, to traverse as many islands as you can before night falls.

1) You get thrills and a big, goofy grin on your face as you chain "perfect slides" together and keep the bird airborne for longer and longer flights. The physics are believable and the sense of flight really tickles your imagination. Plus...

2) The presentation is perfect--Simple, sharp, and totally charming. From the Yellow Submarine-ish landscape to the catchy, joyful music score to the bird's joyful cries, this game presents a little animated world that is instantly likeable and memorable. The camera zooms in and out to keep the bird in frame, the landscape colors change each day you play, day turns to night and the combined sense of freedom and urgency keeps the momentum rolling.

And, when night inevitably catches up with the hero, he curls up and falls asleep for the most soothing game-over moment in iPhone history.

There are a lot of fun games in the iPhone App Store, but very few combine solid gameplay with a real sense of style, wonder and charm. Tiny Wings is a rare, perfectly-executed little gem, and its creator, Andreas Illiger, deserves congratulations and much success.
Posted by Rich T. at 5:34 PM No comments:

My Favorite Disney Song is One Most U.S. Fans Have Never Heard 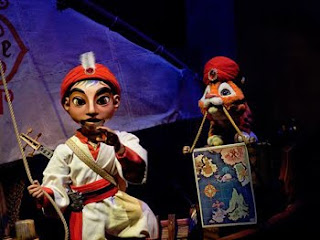 My picks change often, but Second Star to the Right is always near the top of my list.

Recently, however...and thanks to YouTube...I've been listening to an amazing piece, composed by Disney veteran Alan Menken, that I seriously think is in the running for Best Disney Song Ever!

The song is "Compass of Your Heart," and, unfortunately, it remains unreleased in the U.S. This bold, exuberant, epic song was composed for Tokyo Disney Sea's attraction "Sinbad's Storybook Voyage," and it is flat-out amazing, creating an audio landscape of swashbuckling adventure, grand hopes and vast horizons...

...though I have no idea what the lyrics are! The orchestration and performance convey the general idea just fine.

Here's a link to pretty good YouTube video of the attraction. Prepare for adventure, great designs, awesome music and a dangerously cute baby tiger. Jump to the 7 minute mark to go right to the incredible camels-and-fireworks finale.

It's a stylized boat adventure through a storybook epic full of dozens of cartoon-like audioanimatronics that--while Small-World sized--move with astonishing fluidity. And it's all tied together by the song, which is sung nearly non-stop throughout the voyage with the lyrics changing for each scene.

Apparently this ride originally opened at Tokyo Disney Sea as the slightly darker, non-musical "Sinbad's Seven Voyages," but it didn't attract as many riders as hoped. Eventually the attraction was closed for the transformation into its current musical incarnation. I think it works terrifically.

And I can't get that tune out of my head! 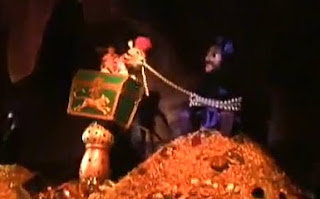 It doesn't take much to make me happy

As if to make up for last Thursday, when my Wii Netflix account couldn't stream anything (first problem I've ever had with the service), they've added six amazingly good Travel Channel documentaries about the Disney parks.

These nearly-hour-long shows basically serve as sunny PR pieces without a single critical comment, but they're genuinely informative and beautifully filmed. Overall, they're among the most polished and entertaining overviews of the Disney parks I've ever seen, and often contain rare footage, interesting angles, and amazing behind-the-scenes shots: The Disneyland episode includes a fantastic segment on the Indiana Jones computerized ride vehicles, giving viewers a great, close look at them in action on the tracks.

I hope Netflix keeps adding Travel Channel shows to instant streaming; In fact, I wish they'd make "Travel" a separate category. In the meantime, this is a great addition for a rainy afternoon's commercial-free theme park viewing marathon .
Posted by Rich T. at 9:03 AM No comments: 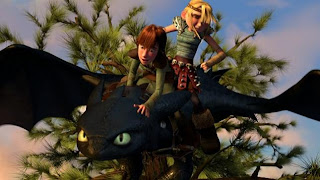 Just finished watching How To Train Your Dragon on DVD (someday, Blu-Ray….someday…). I hoped it would be as good as I remembered. I was not disappointed.

The film rocks on home video. Its astounding fantasy world—with all its beautiful color, detail and texture—roars to life even on my humble DVD player and ancient television. And the story, of course, is just as sharp, funny and near-perfect as always.

The Double-DVD set and Blu-Ray contain a terrific animated bonus short: The Legend of the Boneknapper Dragon. 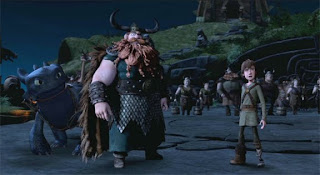 Taking place after the feature’s events, it opens with a nighttime emergency, mirroring the original’s opening dragon attack, but now with the dragons in use as the tribe’s fire department/rescue squad. The film then focuses on a journey to confront a legendary beast which may or may not be a figment of Gobber’s imagination. 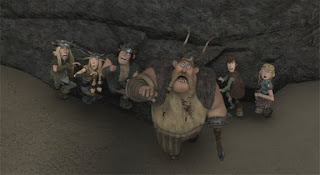 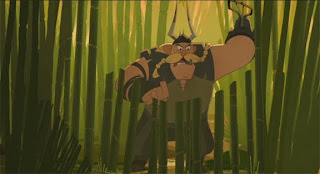 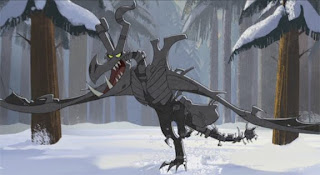 If you've ever wondered what the feature’s Viking world would look like hand-drawn, the answer is: Terrific! These bits are beautifully designed and great fun. Overall, the 14-minute film is an entertaining, light, funny little bonus tale--Exactly as intended. 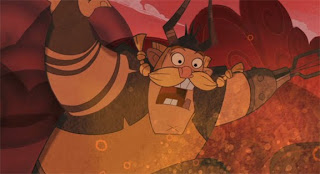 What a great day for home video! If you haven't yet discovered the Island of Berk, and found why it's joining Hogwarts, Oz and Middle Earth on the list of all-time best fantasy locales, pick up this gem; You're in for a great ride.
Posted by Rich T. at 5:39 AM No comments: